Short review of the tasks from the Q3 2022 Roadmap.

HyperChains Alpha test network is running with a new user-friendly interface. The UI was revisited from the ground up. The underlying smart contract were refactored as well. The new UI provides many new features/options. Now it is possible to spawn an customised hyperchain (HC) with a set of configurable variables (like thresholds). Since the goal is to empower everyone to configure and spin its own network, this is a great step forward. With regards of usability and adoption a new tool was developed for the set up of a new hyperchain. This HC tool guides the users through the process. With regard to the parent chain integration a lot of work was done as well: the election was extracted into a separate contract so the same DPoS contract can be used with different election contracts. Currently the test HC has a simple PoS election contract and a HC one. The HC consensus was extended to consume parent chain blocks and use their hashes as a source of entropy for the election of the child chain’s leaders. Parent chain blocks are a function of consensus amongst a few parent chain nodes and those blocks are neatly cached in the node for faster syncing. Since the hyperchains github branch was merged to the main aeternity branch there will be in the future only one release for the main net and the HC. It is just a configuration how to use the release.

The refactoring of the RocksDB was completed. Now nodes will have better consistency of results. As a side effect - the syncing is speeded up a few times. Unfortunately a potential memory leak was discovered after the last release process. The primary suspects were some C++ components. These components were replaced with new C codes. However this was not the cause of the problem. The investigations on the leak issue are ongoing. Please note that it is not a trivial task to expose and reproduce this issue for any node (for example some testnet nodes run for a month now without a substantial increase of memory).

The Rosetta API has two sections: read state and produce transactions. The first part is finished and the related test running on mainnet were successful. The second section of the API (produce transactions) will be developed in Q4 2022.

Both of those SC showcases exposed some points of necessary improvements in the state channel implementation. Some of these improvements were done in Q3 2022. 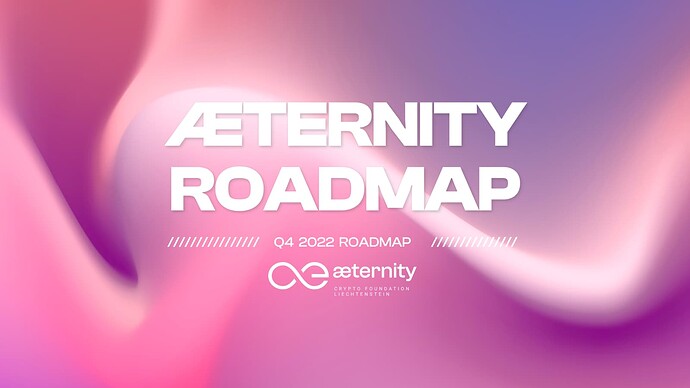 All tools (AeCanary , GUI Launcher, HC UI, etc.) and State Channels will be continuously improved and supported with bugfixes and small features. Rosetta API is in a second stage of implementation and hopefully finished soon.

The goal is to have the initial full HC implementation and to publish the HC whitepaper in Q4 2022. A work on optimization with regards of commitments on the parent chain will follow in 2023.

The following tasks are planned to be completed:

All subsequent tasks are documented, see hcproject. All regular reports on the hyperchains progress can be found in the ae forum, see HyperChains 0.2 and HyperChains Alpha .

A next step is to support starting synch to the live state of a given height, and then continue from there. This could dramatically shorten the time it takes to bring up a usable node.

The updates on the aeroadmap and the aerelease schedule will follow dynamically in this topic. The previous roadmap can be found on the AETERNITY ROADMAP Q3 2022 .

would love to hear/read more about this

Is there a company that can use Ae?

Join us tomorrow 5:00 PM CEST for the Ask Me Anything Session with the Foundation’s Core Developer Team on Youtube!