The ACF is giving funding grants for application on the promotion of the success and growth of the aeternity ecosystem as well as the ae blockchain maintenance. Weekly detail reports on the progress of the developers can be found in the Active Grant Applications under the forum’s ACF Grant Category .

Our goal remains the same: to make the aenode faster, better and lighter and the ae ecosystem more attractive for the users. The hyperchains network using the aenodes has been designed to attract the Aeternity enterprise customers and their users. On top of the faster aeternity network and hyperchain network the decentralized applications (dapps) can be run with higher performance and in a private context. Therefore, the whole aeternity ecosystem will perform with higher availability, scalability, security and performance.

All tools ( AeCanary , GUI Launcher , HC UI, etc.) will be continuously improved and supported with bugfixes and small features.

The first implementation of HyperChains will be finished. It will not be production ready yet but it will consume commitments and will elect leaders based on this. This implementation will have fork difficulty and fork resolution mechanisms. The whitepaper will be published. A docker-compose script will be provided for running a HyperChain locally by anyone.

GC old states were discussed and exploratory work has been done, but needs to be finished and released.

The network monitoring tool is design to inspect network connectivity of the nodes. It can be used to monitor what happens if some peer nodes are taken down.

In a broader sense, this is about improving resistance against attacks in general. A modified version of the MESS protocol is one interesting path. Another area we have glanced at is Byzantine Voting Protocols, for which an Erlang implementation actually already exists (Honeybadger BFT, used by the Helium blockchain).

There are ideas on how to evolve the State Channel Market demo into a more complete, usable and practical demo. A more mobile-friendly interface than WebSockets has also been requested, as well as a different packaging, making it possible to run State Channels outside of the actual Aeternity node.

Improvements in build, packaging and internal APIs are underway, and need to be documented and improved upon the feedback from actual uses.

A number of feature requests have been made from the tools team, and need to be considered. A WIP task is support for provisioning pre-funded accounts for dev mode.

The middleware application will provide support for the hyperchains as well as some additional filtering features. It will add as a service the account “roles” distinction on the activities endpoint. Some refactoring and sync time tuning will be done.

The aternity js sdk will support the hyperchains and the middleware. Continuous redesign, refactoring und improvement is planned.

All subsequent tasks of the hyperchains project are documented, see hcproject.
All regular reports on any grant application progress can be found in the ae forum, see ae maintenance, middleware, js sdk, etc.

The updates on the aerelease schedule will follow dynamically in this topic. The previous roadmap can be found on the AETERNITY ROADMAP Q4 2022 .

Join the Ask Me Anything (AMA) Session with the Foundation’s Core Developers and Middleware team tomorrow starting from 5 PM CET: 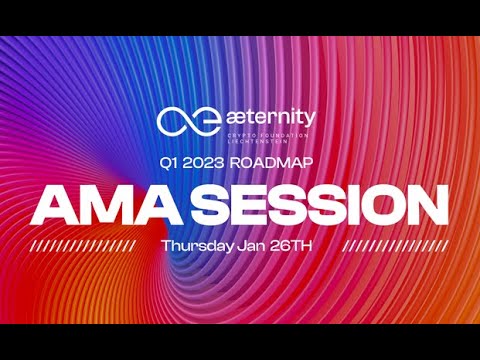