Transaction broadcasted and then not found

So the rabbit whole lead me to a certain race condition in nodes communication. There was a lot of digging and eventually I was able to expose this an actually issue in a reproducible test. All tracked and already fixed in this PR. The fix would be deployed in the next release.

In advance: I have no proof this is what we are facing on main net. It is extremely hard to debug in such distributed environment, especially we don’t have any access to the interesting logs. What I am sure is that this is a legit bug scenario and it would be fixed on main net soon.

6 Likes
Users withdraw Ae on the Gate exchange. Because multiple users reported that the withdrawal failed due to the rollback of microblocks, Gate has announced that it will stop withdrawing AE
filip March 17, 2021, 7:47am #22

That’s great news, thanks for all the hard work

Thanks for reporting it

Those race conditions are notoriously hard to detect and fix, so let’s see if this fixes it

Hey, I have one more question but I won’t spam with new threads.
Some of my transactions take blocks and blocks before ending up in the chain. I’m tracking one of my transactions now and it’s been almost two hours when it finally it got mined. I’ve checked all the preconditions and transaction looks ok. This is something I’ve started noticing in the past few weeks. Is this related with variable hash rate? Can I do anything about this? Set a bigger gas price, or something. This is slowly killing my UX as the user sees pending transaction on frontend and this can last for hours…

hey @filip, that is actually a very good question you have there, it would actually be wort a new thread but lets keep it here. did this phenomenon occur only when sending the TX through SuperheroWallet or directly through the JS SDK or in both cases ? Actually, in both cases you should get a reasonably well gas price estimation automatically, but you can also always set a higher gas price yourself.

I broadcast transactions using js-sdk, the usual . sendTransaction() method, with the default configuration. And I’ve done this on the mainnet/testnet for some time now, but only recently I’ve started noticing issues… Yeah I can try and double the gas price, I know the default value is 1e9, but I was always told that there is no need to change this value. Do you have any other suggestions? Thanks mate!

done this on the mainnet/testnet for some time now, but only recently I’ve started noticing issues…

maybe @dimitar.chain knows whether the miners started having different gas prices which confuse the SDK’s gas price estimation or something ? did @philipp.chain run into this issue ?

I just experienced the a similar issue with my NameUpdateTx:

I tracked this one, and it went through the series of transitions: being included at height N only to be excluded moments later (height: -1), then again included in N+1 or N+2 and so on, you get the point. After few transitions, it eventually got mined and included in the chain at height 401597. This might be useful for your research. Let me know if I can help in any other way, cheers!

Yes, this was really valuable, thank you. This excluded a few possibilities…

Just leaving this here, maybe you can get use of it

Just to let you know, my transactions are now failing regularly. Can’t even spendTx, tried over baseaepp, arkane wallet, everything. Can you confirm? Did you try sending Ae today/yesterday? Try spending and see what happens with the tx and balances

Yes, we are debugging this. We have a clue and it will be resolved soon.

hope to see this fixed soon, thanks! =)

We have some more information for you.

TLDR; this should be solved now

Longer version: we did a lot of digging. Yes, the issue we solved last week was indeed a bug but it was not causing the problem at hand. We dug deeper and deeper and found some optimisation points but no bug that could cause transactions to simply disappear. We were checking syncing, gossiping and even block candidate generation. Everything seemed solid.

Thanks to your input here, we were actually able to trace a transaction (@filip’s) that was accepted in the blockchain and then rolled back. Then accepted again and once more rolled back. @hanssv.chain wrote a small script and we got an a-ha moment:

In the context of BitcoinNG microforks are expected. Keyblocks are being produced roughly every 3 minutes but micro blocks are PoW-free and can be issued every 3 seconds. This results in a really elastic and dynamic system, where you can expect a first confirmation in a matter of seconds. The downside is those micro blocks still have to propagate in the network, restart the miner and this usually means that the last few micro blocks in a generation are discarded in a microfork. There is nothing we could to there, the limit is pretty much the speed of light. A general rule of the thumb is if your transaction was included in the end of the 3 minutes interval, it is likely to get rolled back but included win the next generation.

After some further digging, we found out that not only a handful of micro blocks were rolled back but whole generations full of micro blocks. The cause was a configuration on the miner’s end, nothing to fix in the node, really. The miners applied the new setting around generation height 404840 and you can see the result below: 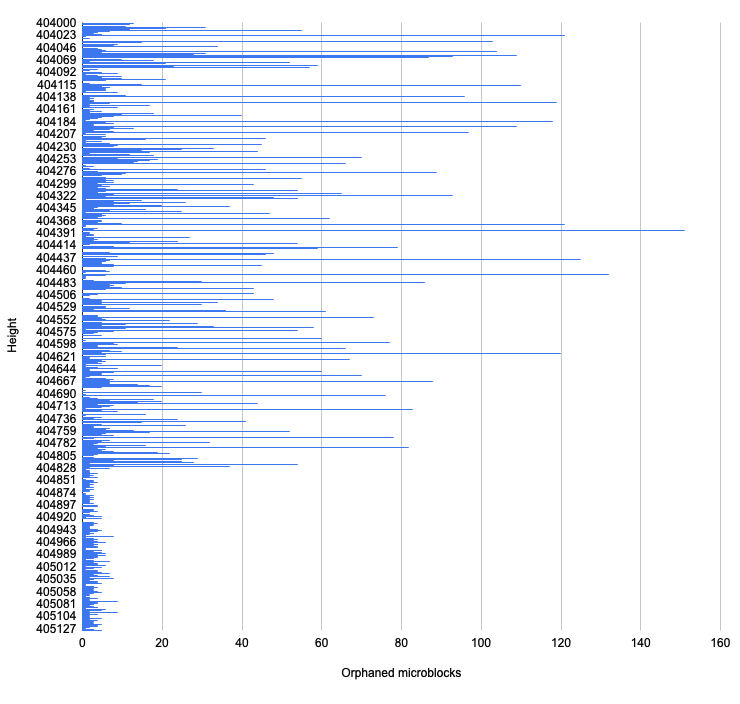 We do still have microforks but they are completely normal and expected. What is more - they are all short in the end of the generation.

Bottom line is the blockchain is a distributed system with a lot of moving parts and different actors. It is really hard to debug but that is a small price to pay for its benefits.

In the context of BitcoinNG microforks are expected. Keyblocks are being produced roughly every 3 minutes but micro blocks are PoW-free and can be issued every 3 seconds. This results in a really elastic and dynamic system, where you can expect a first confirmation in a matter of seconds. The downside is those micro blocks still have to propagate in the network, restart the miner and this usually means that the last few micro blocks in a generation are discarded in a microfork. There is nothing we could to there, the limit is pretty much the speed of light. A general rule of the thumb is if your transaction was included in the end of the 3 minutes interval, it is likely to get rolled back but included win the next generation.

Great effort, kudos to you and Hans!
I was just worried because it was happening so often with the orphaned microblocks, especially because of the recent attacks and so on. But this is more clear now, the node config works obviously , the attached image speaks for itself

Out of curiosity, what part of the node config was changed to achieve this dramatic reduction in orphaned microblocks?

Oh, no - it was a team-wide effort that included all of us, including @uwigeroferlang.chain, @dincho.chain and especially @gorbak25. At the end it was Gregorz that reached out to miners.

It was not a node’s setting, actually. The node faithfully produces correct block candidates to be mined upon.

If the mining happens on the node - the mining process is being interrupted in order to mine on top of latest block. There is a slight race condition there: since mining is async process a key block could be mined while we interrupt the process itself and in this case we still accept the valid key block, even it means micro forking the last micro block.

Since it is not 2010 anymore and individual miners are almost non-existent, all mining is done via pools. The setting that had to be tweaked was how often does the pool reset the hash the miners are mining. That hash represents the latest block (either a micro or a key block) and that would be the prev_hash of the newly minted key block. If that hash is an old one, then all newer blocks are micro forked. It is similar with the on-premise mining, it is still an async process but this time it is distributed between the pool and its miners, which introduces a lot of latency when restarting the hash being mined upon.

There are only two hard problems in distributed systems:

Does this problem exist in hyperchains?

Yeah the way you put it I can understand the nature of this issue, but I can only imagine the actual complexity level of debugging/discovering this…

There are only two hard problems in distributed systems:

I did my fair share of the distributed systems back in the college days, but the Concurrency - The Works of Leslie Lamport is still sitting on the shelf waiting , I’m not brave enough