To level out the playing field, when it comes to proper æcosystem development, we needed some sort of a great unifier. So we went out and made one.

The AEX-9 Fungible Token Standard is a blueprint, a roadmap if you will, for how to create fungible tokens that are interoperable with the wider æternity blockchain-powered network. This, in turn, enables everybody and anybody to engage with the development of a variety of different applications which wouldn’t require any intermediary services in order to operate — much unlike traditional applications.

With a desire to create a faster, better, stronger environment for all, we pushed through the AEX-9 for all to use.

The AEX-9 tokens are, in essence, digital assets that anybody can create. Each token possesses its own particular utility function, for example allowing users voting rights on governance decisions within a system or about a future of a project. AEX-9 tokens could be sold via a plethora of different offerings, as means of raising capital in the early stages of a project, for example. This offers flexibility and a more easier access to liquidity for users.

AEX-9, in its core, is a unifier because it standardizes the core functionality of every single token, which means that all of the tokens created within this framework are interoperable. This interoperability extends beyond just that one system within which they were created — to all which support AEX-9 compatible services.

Similarly to AEX-9, there is a number of other standards out there that are present on the market. The currently most popular one that comes to mind is the ERC-20, the standard for fungible tokens on the Ethereum blockchain. Tokens created with the ERC-20 token standard can operate with the entire Ethereum network. A significant number of popular tokens right now — like the Tether stable coin or Chainlink oracle service — are ERC-20 tokens under the hood. 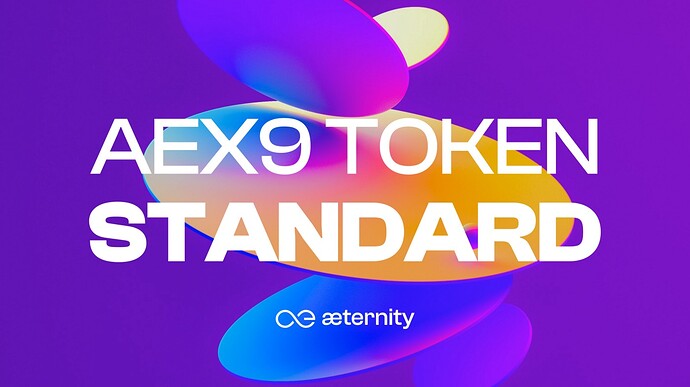 Given all of the intrinsic advantages that the æternity blockchain has over the Ethereum blockchain, the scope of potential upsides towards using AEX-9 standardized tokens — expands exponentially. Similar to ERC-20, but built in Sophia, AEX-9 is the next evolutionary step.

Furthermore, the AEX-9 token standard has been established via the process described in AEX-1. AEX — or, æternity expansions/aexpansions — are standards proposed by the community at large, i.e. everyone! Some of them can be mandatory in a specific context, for example, precisely AEX-1 describes the set of rules governing this repository, but are restricted to the application layer.

Let’s take a look at the role of smart contracts in all of this.

Smart contracts play a crucial role in defining what a token’s total supply is, or will be, how that supply is spread, which issuance schedule is being followed, and the like. Smart contracts handle vital functions, such as enabling token transfers and querying holder balances.

Having this in mind, it is crucial for any project that seeks to employ their usage to take utmost care and pay the highest order of attention to the process of design and implementation of smart contracts — these will define the laws of physics for the entire project. Using AEX-9 means that developers could defer to a predetermined standardized token framework, which saves them not only time but also energy — instant compatibility with third party services that utilize the same standard is achieved.

Utilizing such a standard also leaves ample space for the smart contracts themselves to be designed more carefully. Smart contracts, which are self-executing, automatically adjusting the status quo when needed, meaning that there is no need for a trusted intermediary. This means no third-party intervention or interference.

What can users do with tokens?

The first thing that comes to mind as a use case for tokens, in general, is crowdfunding. Sometimes, app builders may decide to raise capital for their endeavors via a token sale. In return, those that invest in the project would receive a freshly minted token prior to a wholesale price launch.

Furthermore, tokens could be used as means of achieving functional voting systems. Using tokens to vote, via a smart contract, facilitates a transparent yet completely air-tight voting system meaning that no tampering is possible and results are collated and actual in real time.

Additionally, tokens could represent physical assets, such as a house or a car. This use case could still be a bit off, seeing as how the regulators and the wider legal frameworks would still need time to catch up with all of the technological advances, but it is not unimaginable to see major assets being traded and exchanged via blockchain-powered systems utilizing smart contracts. In these instances, standardization is key and having an AEX-9 standard as the foundation could prove to be vital.

Perhaps most importantly — AEX-9 tokens will be utilized on the upcoming æternity DEX. Smart contracts that power, regulate, and run the DEX will be powered, directly, by AEX-9 tokens — meaning that the next step in decentralized finance will be natively a part of the wider æternity ecosystem. Fostering tokenization is the first, and vital step towards crafting a fully DeFi-ready environment — and it will be built with AEX-9!

However, ultimately, it is up to the developers and community members — all of you — to make the call on what it is you want to build. In a world in which there are clear standards, which are sound, transparent, and powerful — there is no limit but the sky.

Read the full article on the æternity blog: https://blog.aeternity.com/aex-9-fungible-token-standard-9aed1af242ab

Hi Erik, thanks for the article and update on AEX-9

You referred to an upcoming AE DEX but the related BLOG post is of general nature. What are AE’s plans re DEX? Is there something concrete in the works? I just heard once about a partnership with Portal, however not sure whether they actually launched or not. Thanks and best, Max

Hey @deMaxli, thanks for your interest in the upcoming DEX release. The contracts are already deployed and the UI is being updated as we speak.Also, there will be a private beta release very soon for liquidity providers and traders, stay tuned for more news here on the forum