The First informal meet up in Ondo state university of science and technology, okitipupa, Ondo state Nigeria. We were inagurated yesterday 14th March, 2020. We had a total number of 32 attendees at the eveent and we had 12 Developers, 8 graphic designers and 12 Entrepreneurs as well as aeternity blockchain enthusiats. The new memebers were so happy to join in and we had a nice time during the introduction class to blockchain, aeternity blockchain and how to access dacade.org and earn while learning. The aembassador @Shittuolumide was there on stand by to teach and make sure everything was in order as well as the core team comprising of 7 members. The meet up was inverted and planned alongside with @Barineka the aeternity ambassador Nigeria who played a huge and important role before the event, during the event and even after the event.
Our plans is to produce solutions to real life and solutions needed in the real world using aeternity blockchain and starting from our local environment and move up to the Nationals and to the world at large. We already have 3 developers skilled in Sophia PL and we have 8 good graphics dvelopers on stand by with lots of techpreneurs.
In conclusion, We had a brief introduction to blockchain, Aeternity blockchain, brief introduction to Sophia PL and subsequently when we have more meetups or webinars we hope to build a strong team of aeternity blockchain developers!

Our next meets will be based on equipping members of the community on Sophia PL and making familiar with the world of Aeternity Blockchain.
Watch Out for Aeternity Osustech 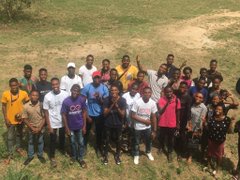