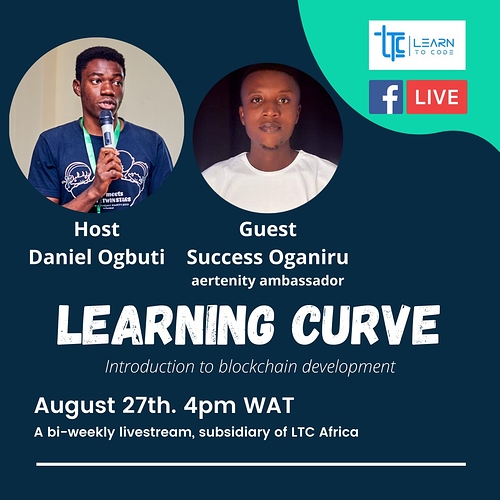 The next event I will be guest discussing on introduction to blockchain development in #Sophia and #Aestudio.

Join us tomorrow on Facebook live for another @aeternity discussion as I will be guest at the #Learningcurve bi weekly event Organized by learn to code Africa community. Topic : Introduction to blochain Development. https://t.co/12VcPHpi0c Come learn how to apply and build

Join I and Success for another episode. Today we will be getting into the crypto world with topics like blockchain, smart-contracts and how you can get started learning... 4PM today via Facebook https://t.co/iEbMd10cN6 Or... https://t.co/HK5OXhN3XV #CodeNewbies #100DaysOfCode

We look forward to have another amazing time with the learn to code Africa community learning about aeternity development and Sophia.

[IMG-20200821-WA0117] Learning Curve is a monthly learning event organized by learn to code Africa community. The next event I will be guest discussing on introduction to blockchain development in #Sophia and #Aestudio. #MEETING LINK# Holding on Thursday August 27th by 4pm Venue Facebook live. http://www.learntocodeafrica.com/ We look forward to have another amazing time with the learn to code Africa community learning about aeternity development and Sophia. @erik.cha…

I had a super interactive time with the learn to code Africa community discussing about blockchain technology and æternity blockchain.

We went from understanding blockchain to discussing real world applications and developing on æternity.

The event went in an interview manner which we discussed theoretically and then had a session for discussing smart contracts on aeternity using AE studio writing out sophia.

We saw smart contracts in action and we did a demo of how a dapp works and also deployed a written smart contract for developers who were the audience of the event to get started building on aeternity.

The event had 45 views as at event time and still grows by the day.

Reference the live stream on Learn to code Africa Facebook page which is has the highest number of views at event time of the learning curve bi weekly event.

Learn To Code. 992 likes · 36 talking about this. Learn To Code is a network of focused passion filled youths with an interest in teaching and learning eveything there is to know about programming.

I had a super amazing time at #Learningcurve organized by Learn to code Africa with the lead @daniel_ogbuti discussing blockchain Development and @aeternity. https://t.co/5m8rbIcnlv We also had a getting started session with a demo of smart contracts in #sophia and #AEstudio.

"I think the issue we have is not blockchain but about education" I and @SOganiru @aeternity ambassador on an Episode of Learning Curve talking about #cryptocurrency and how to get started in blockchain development. #blockchain #CodeNewbies #100daysofcode https://t.co/UCoQNSYWhd 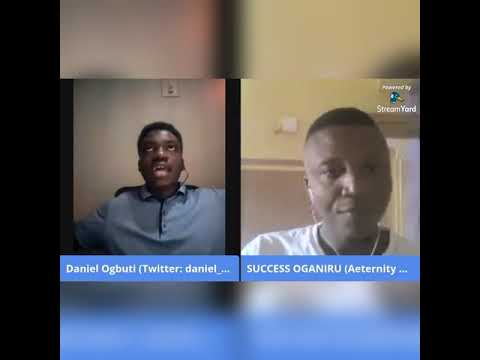 We are gaining more audience in developer communities and we hope to do more.