Jæm Sessions, the weekly virtual gatherings of the æternity community, happen every Wednesday at 4 pm Central European Time on the dedicated Discord channel. They present a unique way for a decentralized blockchain community to meet, learn about and discuss its ecosystem.

The gathering is not only for the existing æcommunity members, it’s open for everyone, and especially useful to newcomers and people interested in the æternity ecosystem, with questions, ideas, enthusiasm about the decentralized blockchain technology. The discussion is not limited only to the æcosystem, however. More often than not, it veers into a general state-of-the-blockchain conversation, or even a philosophical debate, with ideas of freedom, privacy, and transparency in the blockchain field being openly and sometimes very deeply discussed. 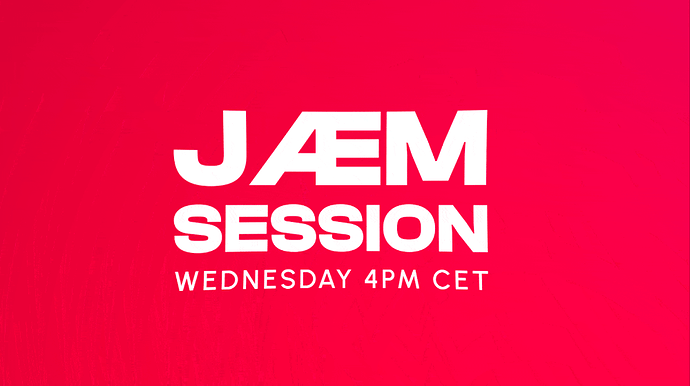 Such was the case during last week’s Jæm, when a special guest and an important figure in the æcosystem joined the conversation. Georg C. F. Greve is the Chairman and Head of Product at Vereign AG, one of the most successful companies utilizing the æternity blockchain technology to its benefit and ours.

Vereign has developed the SEAL, an email verification system that enhances each email with a digital receipt that is independently verifiable and secured by blockchain. It provides a decentralized way to secure your email correspondence, which is crucial in today’s digital environment, especially when we’re talking about confidential business or state-related conversations and documents.

During the Jæm, Georg spoke about the difficulty of presenting blockchain solutions to the general public, and ways of simplifying and making them user-friendly.

@aeternity
"In the world, normal people still don't understand much about blockchain, so we had to simplify it." @ggreve as he demonstrates the email sealing with @VereignSEAL. "Blockchain and PoW were originally built to combat spam, now it's coming home with email sealing." #JaemSession

Subsequently, the discussion reached the other project Georg and his team have been working on for years. Something that he describes as his life’s mission and something that could change the internet and with it the World — Self-sovereign digital identity.

With the debate of our data and identity abuse raging in the ether, Vereign seems to be close to a solution to the problem — a decentralized digital identity stored on the blockchain and verified not by corporations such as Google, Apple, and other digital industry giants, which currently rule the internet, but through a highly complex decentralized system, utilizing state-of-the-art encryption methods.

When asked when he expects normal internet users to be regularly using Self-sovereign identity in their online interactions, Georg’s answer was between 2 and 5 years from now.

As the Jæm went on, the æcommunity asked Georg about Vereign’s recent cooperation with the EU projects and especially their involvement in the Gaia X initiative.

@aeternity
"The EU is lagging behind in the blockchain environment, and Gaia X is an initiative that strives to rectify this by creating an independent congregation of European blockchain projects. æternity, with its unique properties, would be well placed to take a meaningful role in it."

With this special Jæm Session coming to an end, the conclusion is that the weekly community gathering has grown bigger and better with time, and the æternity blockchain team has plans to keep growing it. The sessions featuring guests with valuable knowledge and experience building within the æcosystem seem to be the most interesting ones.

Although the nature of the Jæm is to be open, without any agenda or planned topics, it makes sense to invite some major æcosystem figures to join the sessions every now and then and present their projects, companies, and view of the ecosystem.

Additionally, we’d like to invite everyone interested in the æternity blockchain and its ecosystem to join us this Wednesday at 4 pm CET, ask anything you want to know about æternity, and meet other community members, builders, developers, and team members.

Read the full article on the æternity Blog: Jæm Session, the community’s window into the ecosystem, keeps getting bigger & better! | by Danilo Polovina | Mar, 2022 | æternity blog

Thank you for the opportunity and the great Jæm Session last week.

Yesterday I came across this great primer and quick intro into DIDs and everything people are building upon it - if æternity were to fully embrace this now, and decisively, we can be a driving force in all this:

Decentralized Identifiers: Implications for Your Data, Payments and...

Impervious Technologies Inc. (impervious.ai) 3.21.2022 Abstract Decentralized Identifiers (DIDs) are user-controlled, can be globally persistent and are generated or registered cryptographically. A DID consists of a Uniform Resource Identifier...

Dear @erik.chain, could you please make recording of the jaem sessions and post them as YouTube video. I think the aecommunity can view the records at any convenient time and interesting calls can not be simply wrapped up in a post without missing the full information. I was disappointed to not find a record about the last Jaem session.