I already talked to @milenradkov.chain in the private chat but since for me personally there isn’t a clear description / tutorial how to achieve our requirement and I think multiple parties could be interested in this topic I want this to be discussed publicly.

We are currently developing aenalytics and we plan to release a beta in the near future. This is a spare time project and it was already started some time ago. We were in contact with @stoyan.chain and he told us that we could connect to the base aepp using a hidden iFrame. This worked like a charm in the past and we were able to allow users to connect to aenalytics using the remote-connection of the base aepp. As far as I know this approach was also used in the BRI vote. Unfortunately @stoyan.chain doesn’t seem to be responsible for the base aepp any longer. So I need to ask for help here

At a certain time in the past (~4-5 weeks ago) this functionality was broken and cannot be used any longer. The popup that normally appeared to confirm the connection to the aepp is still appearing but it doesn’t contain any content and prints the following output in the logs:

I found following boilerplate which seems to be up to date:

Unfortunately I can’t get the base aepp connection working and get following error when starting it:

When modifying the code in App.vue and enable AEX-2 the right llogic seems to be executed. Unfortunately I still get errors in the console. 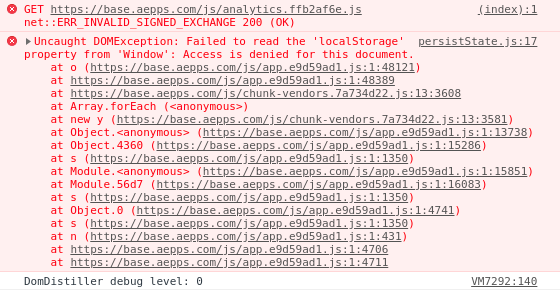 I think I found the guide to achieve what I need:

will test it tomorrow

I can check it on monday. Lets have a chat then. To reproduce I have a few questions already

the online version is v0.22.0 (https://base.aepps.com) where I have an active remote connection to my mobile base aepp.

my example aepp is using SDK version 7.0.0 (but it didn’t work with an earlier version either)

I just tested again using this example aepp but connecting to https://base.aepps.com instead of the “identity-aepp” running on http://localhost:9000 (which I also tested and didn’t work):

I added log-outputs to all functions that are involved. and it seems like scanForWallets is being executed without any errors on both, Brave (deactivated shields) and Firefox. but somehow the application doesn’t handle the connection and wallet-detection for the base aepp: 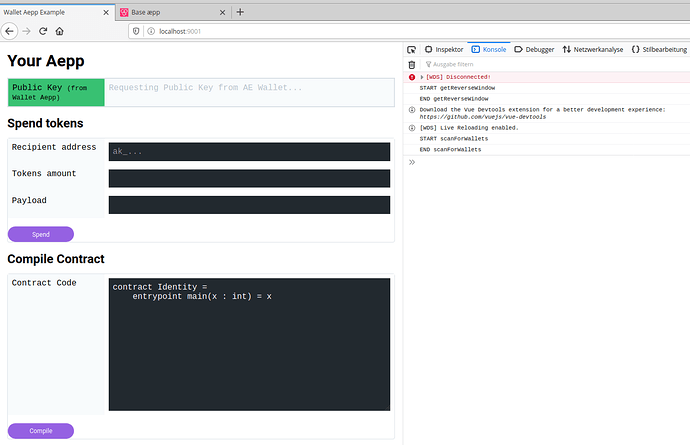 There are known issues with the reverse iframe implementation (eg. having a mobile account linked to base.aepps.com). This is why we currently recommend using the website on your phone (or simulating a phone on a desktop) to load the aepp in an iframe. We are working on this. Maybe @nduchak.chain can give a quick update

is there an issue on github we can follow? because I am exactly testing the base aepp in combination with the mobile app. IMO this is the most common usecase except for waellet users.

@kenodressel.chain can we follow a github issue here or should we create one?

I haven’t tested it yet with simulating the mobile phone on desktop. but if so it should work, right?

There was some obvious bug: https://github.com/aeternity/aepp-base/pull/1372/files

Reverse-iframe looks working on https://example-aepp.origin.aepps.com/ with https://feature-fix-reverse-iframe.origin.aepps.com/. So, I have merged it to develop branch. Probably we will release it soon. Also, it shouldn’t work with [email protected] until we update it in the Base app.

I have asked to redeploy Base app to avoid confusion because of version mismatch (actually, there were no any significant changes).

@davidyuk it seems like I still cannot get it working. in the best case I can test it locally and connect directly to https://base.aepps.com

please let me know as soon as I can get it working with https://base.aepps.com from my local machine and what SDK version I need to use in my local application

@davidyuk you let me know when it should work so that we can test again?

any update/info here? should it work again now?

@milenradkov.chain Can you provide some information here?

Hey @davidyuk can you update us here, please?

Sorry, I’m too busy with other tasks and wasn’t able to find time to update the SDK in the Base app yet.

no problem. please don’t forget it and tell me when its done =) thanks!