I was trying to understand concept of state channel in a little deeper way and suddenly this came into my mind. Here is thread of what I have understood so far.

Is it possible to transact with having internet connection.

Imagine a small remote village in India, where the internet connection is very weak. I tried giving it a thought, and I came up with following protocol (hypothesis). 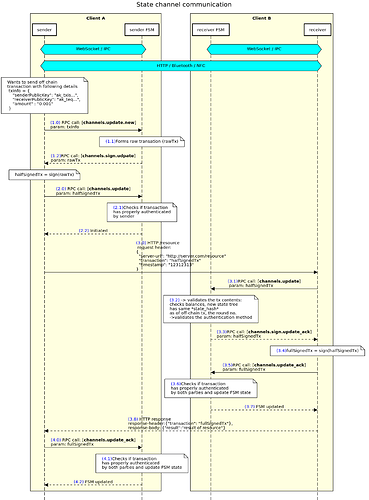 Points to be noted here:

Now my question is, if I have to make a simple poc for this protocol, will it be even possible to do? I am willing to fork the aenode and understand its code base.

This is something we’ve been bouncing a lot but there are some issues there.

This could be done but to a limited extend. Doing this you lose:

I’d rather see the WebSocket layer being provided with a fallback mechanism to a HTTP but keep the FSM with a stable connection to a node.

Sender sends the halfSignedtx to receiever via HTTP (if internet is there) or Bluetooth or NFC offline (3.0)

This is already available. If the initiator is offline, the responder being the service provider can provide both FSMs with a co-authenticated transaction. So if the initiator has bad internet connection - they still can provide the responder with authentications and this will work. Important: if one of the participants does not have a stable connection to a node, they enter in a trustful scenario - the other participant can cheat them

Hi Vishwas, have you thought about integrating with SMS channel?