ækiti is a community of developers, writers, digital designers & entrepreneurs interested in learning about and developing solutions using æternity technologies

Check out our first write up on Medium 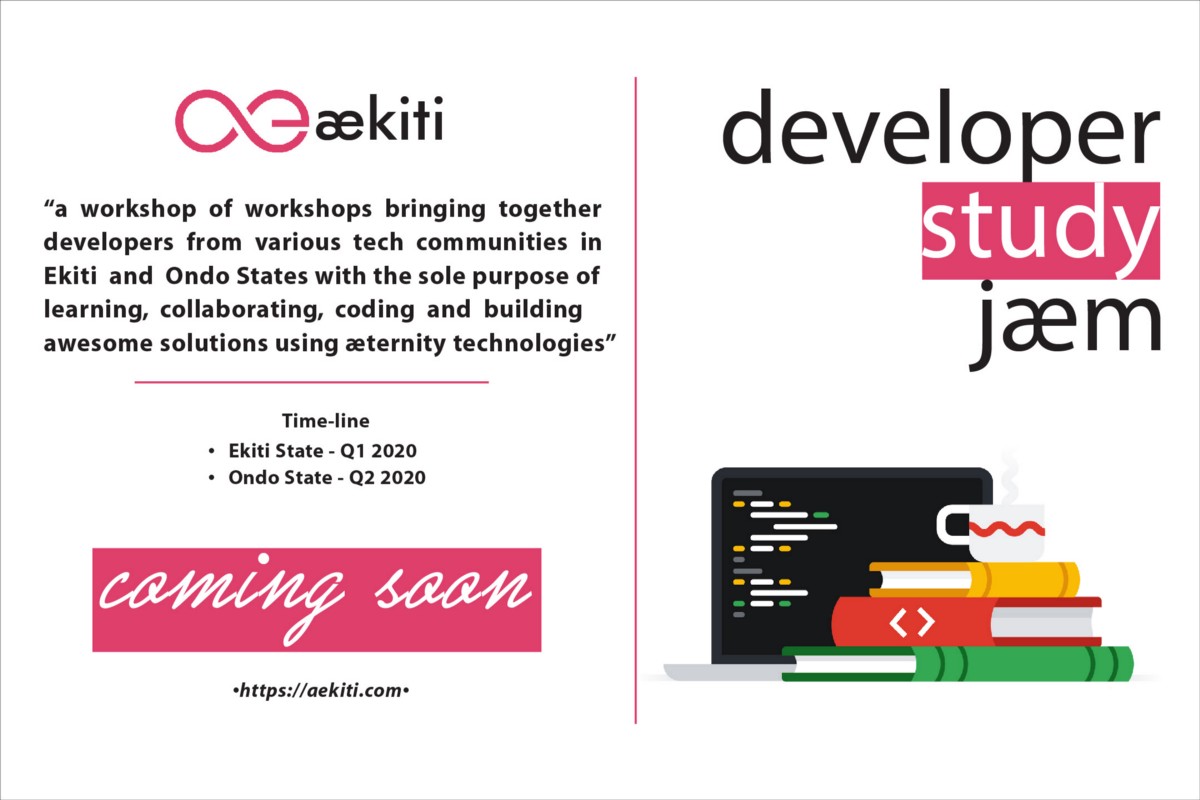 So, ækiti is organizing a Developer Study Jæm for Ekiti State and Ondo State in Nigeria. This is coming real soon

Check out our Curriculum for the Ekiti State Developer Study Jæm series.

You not being in Ekiti doesn’t restrict you from participating in the Developer Study Jæm series. We will release video week staring week 4(Check Curriculum for more details) on our website where you can follow the jæm thread. You can also start preparing for this by visiting our learn page now @

ækiti is a community of developers, writers, digital designers & entrepreneurs interested in learning about and developing solutions using æternity technologies

#aekiti has a very important announcement to make😁. #devstudyjaem is on Track 😆😆. The #workshop is moving steadily and beautifully 💃🏻 Learn more on our website https://t.co/XRnEaaq9SL. #aeternity #Sophia #statechannels #oracles #AENS #blockchain

You can also take a look at these search results: https://twitter.com/hashtag/devstudyjaem

The long-awaited Ekiti State Study Jæm started on a good note as the participants showed up with their gadgets, a broad smile and an eagerness to learn.

æternity is an open source in the blockchain that help solves the problem from such has:

The lead for ækiti community, in the person of Emmanuel Joseph(JET), welcomed the participants by giving them full details concerning the workshops and breaking down the curriculum.

Developer Study Jæm main goal is bringing out existing web developers from different tech communities to learn æternity technologies, provide necessary support and help them get rewarded on the æternity development 101 course on dacade. Apart from all these, they are also an opportunity to win several prizes from the competition.

Jesulonimi Akingbesote (The Co-Lead for ækiti) took it up from there by going into a detailed explanation about Blockchain and the advantages and disadvantages of Blockchain.

Among the advantages are :

With blockchain encryption, decentralization and tokenization are made even possible. Jesulonimi as well spoke about Nodes, Proof of Work(PoW) and Proof of Stake(PoS) etc.

JET ended the first day by explaining æternity, it’s technologies and some terminologies:

State channels Via Smart Contracts : State Channels provides a method for users to privately communicate and transact off-chain. Only in the case of a disagreement between the contracting parties does the æternity blockchain enforces the smart contract code.

Oracles : Oracles are source of information which can be accessed on the blockchain. Anyone can be an oracle provider, their reputation determines whether or not they are seen as a reliable source.

JET then briefly explained dacade and a promise of having an online session with the founder the next day.

And as promised, the second day kicked started with Moritz Stellmacher — Founder of Dacade — giving a total review of what Dacade does. He said Dacade offers practical, active learning with real human feedback while being scalable and affordable. With the help of a slide, he further added that with Dacade, the participant had the possibility to earn cryptocurrencies by solving challenges and giving feedback to their peers. In Dacade learning environments you also get to work with peers to learn about blockchain technology.

It was an insightful session as he showed the participants how to make reviews and learn effectively on Dacade. He also gave detailed answers to every question asked.

JET further advised the Jæmers to take up the opportunity to learn on Dacade and explained how dacade would be used during the #devstudyjaem. He also reminded them that at the end if Ekiti Study Jæm, they would be building a Chat æpp with æternity blockchain as their project.

To further prepare the Jæmers for the more practical aspect in week two; where they would be introduced to Sophia(Programming language for æternity), State Channels and æternity JS SDK. Jesulonimi did a review of HTML, CSS, and JavaScript.

With the sharing of snacks and enthusiasm in the part of the participant. The session for the first week came to an end. 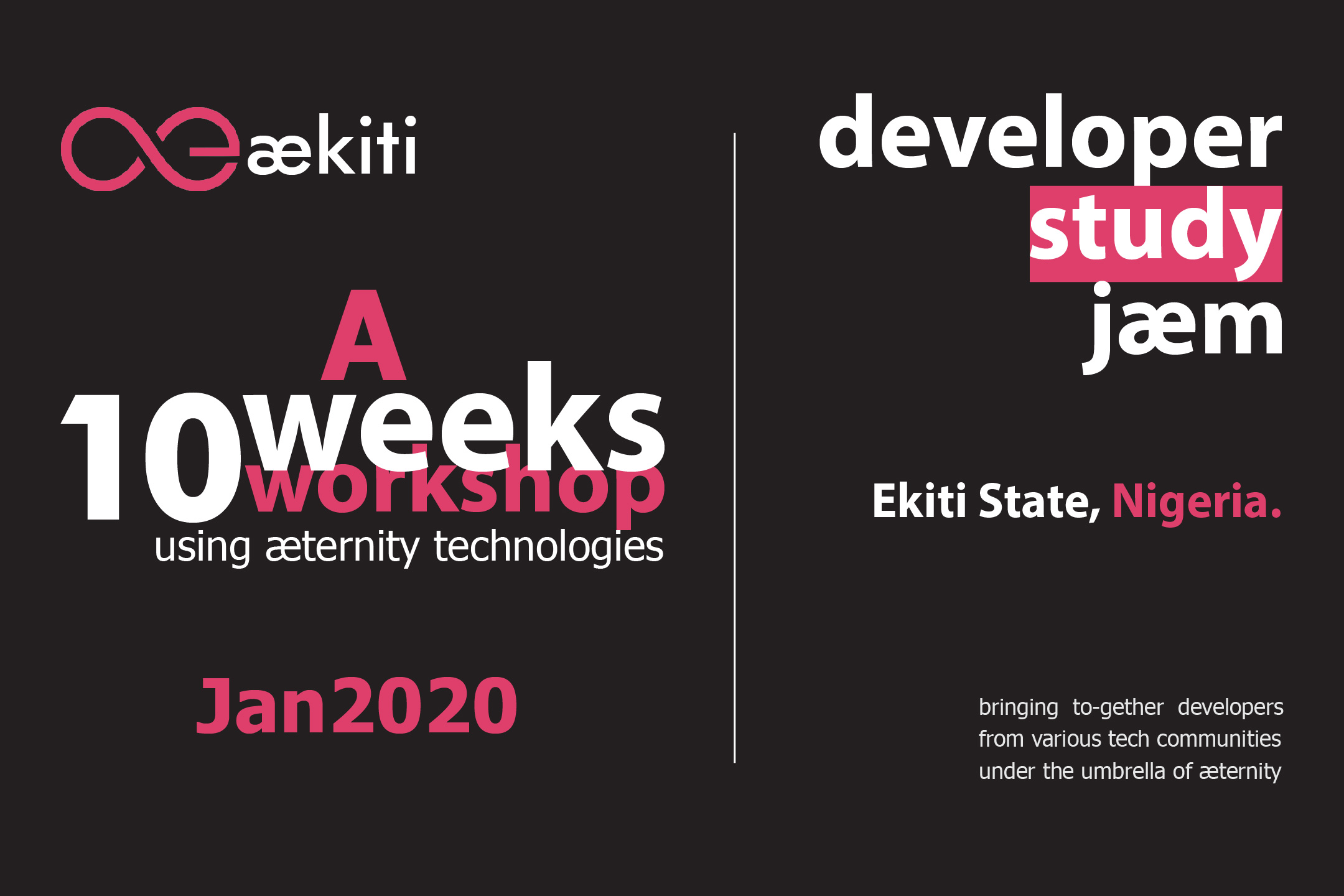 The week was not for the faint-hearted at all, as we dived straight into Sophia(æternity blockChain language) after giving a brief review of HTML, CSS, and Javascript the session before.

The Sophia language is derived from OCaml/ReasonML family. It is strongly typed and has restricted the inconstant state.

Sophia is customized for smart contracts, which can be published to a Blockchain (the æternity blockChain). Thus some features of conventional languages, such as floating-point arithmetic, are not present in Sophia, and some blockchain specific primitives likes constructions and types have been added.

The main unit of code in Sophia is the contract.

Dacade was reviewed again and we built a similar Memevote smart contract. According to @snaphuman.chain, MemeVote is a decentralized application of the aeternity blockchain (daepp) that allows registering, tag, comment and vote user memes referenced by URL. This daepp is the result of the Aeternity Development 101 course from dacade.org platform, which is a great community that enforces people to learn about this exciting technology

The second day in week two was opened by @emmanueljet where he spoke about æternity Javascript SDK, it’s versioning and how it can be used on the web. He then started a discussion with the jaemers on their aeternity development 101 course submission on dacade.

@jesulonimi went a little deeper with Sophia and they built an authenticated to-do - list æpp which has started functioning with more features to be added as time goes on.

Very nice what you are doing. I would welcome some feedback from you on how aeternity could improve their developer experience, what type of tutorials and guides you would need and what the current painpoints are so we can address them overtime!

Thank you @emin.chain. We presently created a topic(Issue Reporting - Developer Study Jæm) to report any issue faced during the study jæm.

I will send a DM to explain this more.

Here is a good news to everyone who wants to participate in the ongoing Developer Study Jæm(Ekiti State) but are not in Ekiti State, Nigeria.

You can now participate remotely to learn æternity technology.

Kindly sign up using the link below and expect a Zoom invitation link to our first Online Session on Saturday 22nd February 2020 by 10:00 AM(WAT).

That is great @emmanueljet Thank you for giving the opportunity to more people to participate.

What do you do about AE?

Kindly explain what you mean

Has the team developed a project based on the AE blockchain?