Hi!
Here is a hyperchain FAQ based on a Q/A session with @vacuumtraveler.chain - dm me if you want the full transcript of the session. The FAQ does not take into account some details like generational forks which came up after the Q/A session.

What is the main use case of Hyperchains?

The point is to have the ability to launch a new secure blockchain whenever you will need it – doesn’t matter if it is for a company, some governance or just a single user private business. PoW is only secure when it is backed by immensive computational resources, simple PoS approaches have glaring issues - Hyperchains are simple, cheap, secure and infinitely scalable while reusing the full potential of the aeternity ecosystem.

Which problems are hyperchains solving?

Everyone should be able to run their own secure public or private blockchain without investing a fortune in mining equipment or running the risks attached with PoS algorithms. Private hyperchains come in handy in environments where access control alongside a permission scheme is a requirement. Many blockchains are not scalable enough to adopt them in many places - hyperchains are scalable indefinitely with low cost.

Are Hyperchains the best way to solve the problems we are addressing?

Pure PoS blockchains usually change to PoW or turn out to be scams. Working approaches depend on some sort of PoW in the end. PoW is a simple and understandable approach to solve a very complex problem. By using the entropy of a PoW chain we may create cheap secure child chains with almost the same security as the parent chain - if you really want you may also use multiple parent chains to have greater security than the individual parent chains.

How do state channels compare to hyperchains?

Are hyperchains just another PoW or PoS blockchain?

No. Hyperchains feature a hybrid approach which combines the advantages of PoW and PoS without acquiring many of the drawbacks of classical PoW and PoS algorithms.

How to describe the consensus algorithm used in hyperchains?

Hyperchains employ a modified BitcoinNG consensus algorithm. Instead of electing the leader of a new generation via PoW we use another blockchain with finality guaranties to held fair and provable leader elections based on the voting power determined on the hyperchain. Proof Of Fraud is modified so it deletes the stake of misbehaving validators and works both on microforks and generational forks.

This is a PoW consensus algorithm which compared to Nakamoto consensus featured in Bitcoin, does not put transactions in mined blocks. Block mining is used to elect a leader which gains exclusive transaction processing rights until another miner creates another valid so called “keyblock”. The elected leader places transactions in “microblocks” which link to the previous key or micro block. Compared to classical Bitcoin consensus Bitcoin-NG improves greatly on transaction processing speed, throughput and confirmation time. Aeternity mainnet is able to process almost 120 TPS(transactions per second) compared to the 4-8 tps of bitcoin.

What is the leader election process?

How is the voting power determined on hyperchains?

Based on tokens frozen in a special contract on the hyperchain - users may delegate tokens to other users. Withdrawals from the contract are delayed for some time to allow punishing malicious leaders. The top N delegates with most delegated tokens are eligible to become leaders.

Will the voting power of a delegate depend on the stake age?

Yes, your voting power increases both with your stake and with your time of involvement.

Are hyperchains more secure than the parent chain?

No - the only way for hyperchains to be more secure than the parent is to attach to multiple parent chains. Hyperchains with fairly distributed voting power between multiple independent parties are just as secure as the parent chain.

Are staking pools needed on hyperchains?

Are hyperchains secured against an entity which holds most of the tokens?

No - this would be similar to a 51% attack on PoW cryptocurrencies. Ripple premined 80% of all their tokens - you could do this with hyperchains but the safety would be questionable.

How hyperchains deal with forks on the parent chain?

Is the distribution of tokens in the hyperchain important for security?

It depends on the use case and implementation - for instance you can have a single user hyperchain where you just timestamp some data. When launching a public multi user hyperchain it is important for the stake to be distributed fairly to have almost the same security as the parent chain.

Yes - they will be adopted and reused as much as possible.

Will atomic swaps be part of the hyperchain protocol?

No, this will be implemented in the wallets.

Do the parent chain need to run hyperchain software?

Can the hyperchain consensus algorithm be applied to other blockchains?

Yes, hyperchains can be thought of an universal way to scale blockchains.

Can a hyperchain attach to Bitcoin or other not Turing complete blockchains?

Yes, as long as we have finality guaranties and the ability to submit commitments to the parent chain.

Is it possible for the child chain to outgrow it’s parent?

It can happen but not very likely - in theory the hypothetical Starbucks hyperchain can become more popular than the parent chain. Depending on the configuration the security might become questionable.

There is a company called Hyperchain - it appeared several years ago and is completely unrelated to this project. This is just a random name collision.

11 Likes
Hyperchains whitepaper is released!
Can Hyperchain be use-case specific
Hyperchains Ideas
План по повышению безопасности блокчейна æternity
Can I write a contract that talks between the chains?
Vikram August 5, 2020, 9:42am #2

Any paper on Hyperchain?

Thank you for this FAQ, very helpful!

I have to say I really quite like the idea behind Hyperchains. It’s quite smart. Turning Bitcoin into a global source of entropy that is the predictably same for all nodes has a lot of potential, I believe.

My questions right now are:

It should transition smoothly, if it is not compatible with existing AE, no exchange is willing to support it, and no circulation it will become a dead chain.

We designed it to make a smooth transition, we are even recycling the existing block structure in order to be compatible

Does it adopt a 1:1 mapping lock method like ERC20 exchange for mainnet AE?

POS pledge, is it mining?

Will there be new issuance?

Hello @vishwas_hypermine do not forget all updates are here: Hyperchains development updates including whitepaper

Hi guys I was trying to visualise Hyperchains as POS based layer 2 protocol which can anchor on Aeternity or Bitcoin networks. 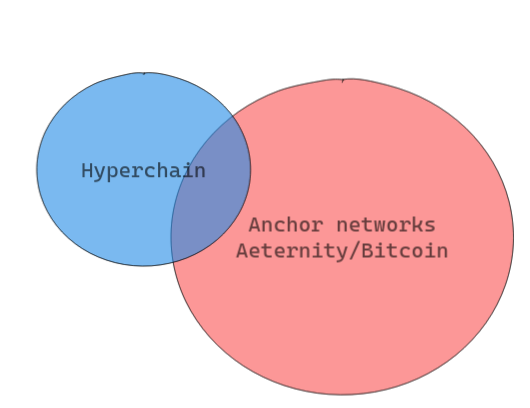 If this is true, is it possible to think off privacy sub-chains (or quoroum formations like Stellar) within Hyperchains? Like say if a company do not want to reveal their data to public but yet want to use safety feature of Blockchain. Can it be possible?

here is how I visualize 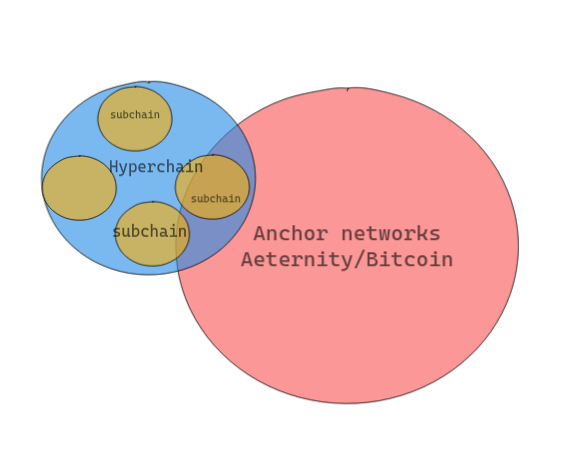